Life is what you make it - Book Review 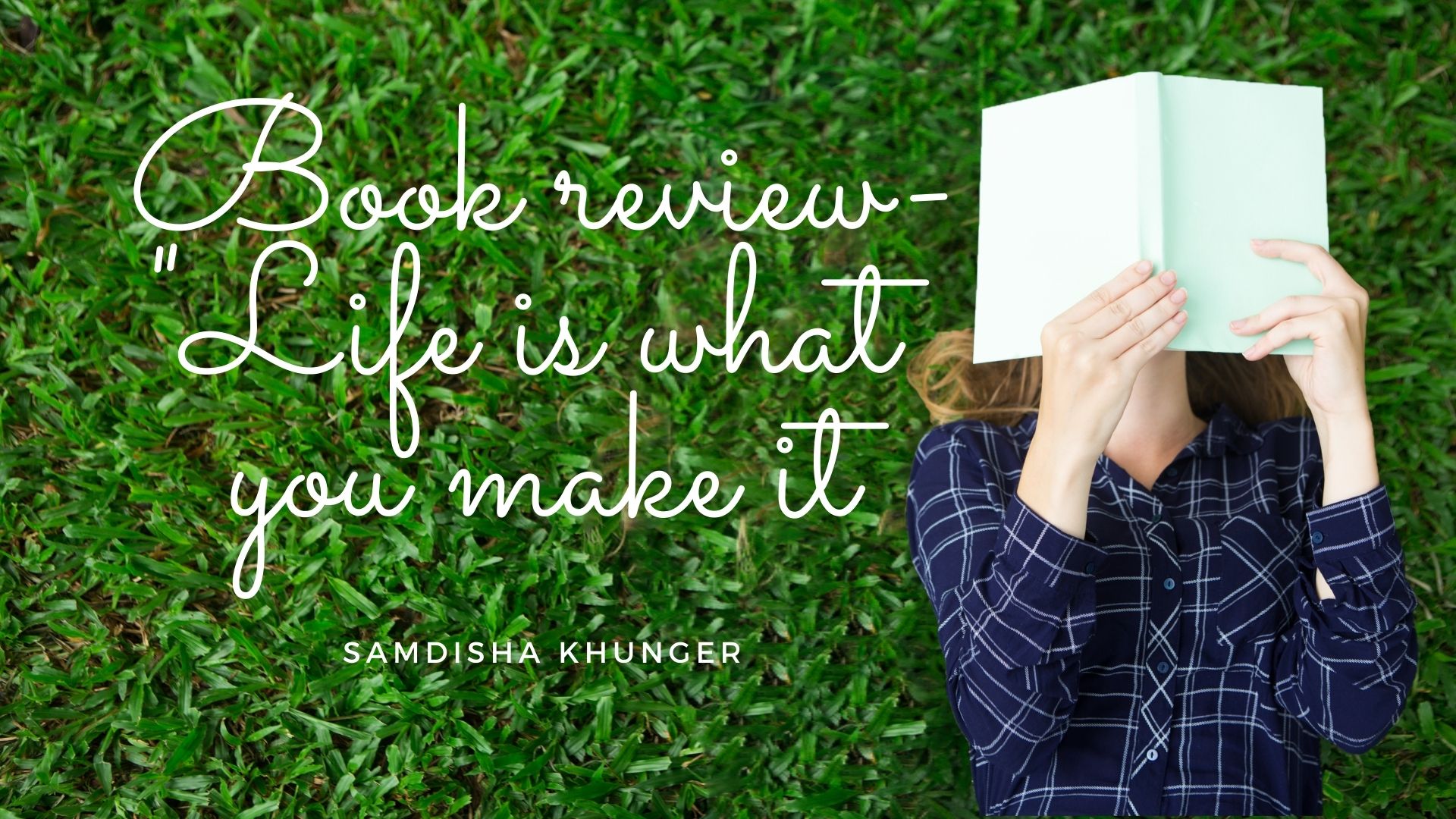 Hi Guys! Welcome to my blog. A brief intro about me - I am currently a student of 12th standard aspiring to crack CSE. I recently started reading novels and “Life is what you make it” is the first novel I completed. Yes, guys the first I completed.

Earlier many-a-times, I thought that I should start reading different books(other than those taught in school) and I had even started reading a few, but I was not able to complete any such books.

Then I thought that I should focus on some fiction novels, which would arise some curiosity in me and I would be hooked. This is exactly what happened.

When I first started this book, I was engrossed in it. Believe me guys, it just took me 3 days to complete it. I was even shocked with myself as before this, I had never even read a single book in an entire month.

This book is a fiction novel, but it is based on some true incidents.

The protagonist is a young girl named Ankita Sharma and the entire story is narrated by her. Every emotion is so well portrayed that I even had tears reading certain parts. We come across the thoughts of Ankita, we see her entire growth, the ups and downs she faces in her life, and how she fights every emotion of hers.

I feel that most of the people would find themselves connected to the the protagonist at some point.

That’s because, now, as of today many people feel stressed and depressed inside even if they don’t show it outside.

It may not be on such extreme level as Ankita feels, but we can connect with her and learn from her experience and help ourselves in our day-to-day life.

Some points have penetrated deep in my heart such as when Ankita was on the terrace trying to take her life, her father came and he cried in front of her.

The feeling portrayed by the author in this scene is so touching that you can feel the emotions. And when Dr. Madhusudan understood her condition and consoled her, that point felt deep.

Below, I would provide a summary of the book. Guys, if you are interested, please proceed further. If you don’t wanna spoil it for yourself, then you can directly read the book and believe me it will be a good experience for sure.

Also, on a side note, you can click on the image below or click here to buy the book.

The story begins with Ankita(originally from North India) shifts to Cochin after her 12th standard as her father got transferred. The story is set in the 1980s when there were no mobile phones. People used telephones only to communicate.

Further, Ankita’s parents were very strict with her. So, she was not allowed to converse on phone with her friends especially boys, and they were not allowed to enter her house.

However, she had the freedom to write letters to her friends. She wrote letters to her special friends, Vaibhav whom she had feelings for. She got admission to St. Agnes in Cochin which was one of the top colleges in the country. It was an all-girls college.

There she made friends with Suvi, who later became her best friend, and Janie and Charu. It was a new experience for her as she had studied in co-ed till her high school.

She was always always excited to write letters to Vaibhav describing her life. But letters usually took five days to reach the other person. So they decided to have phone conversations when her parents went for morning walks.

There was one time that she was almost caught by her parents but escaped narrowly. Overall, her life was going smoothly, and she was happy.

When college elections took place, her friends even without consulting her, nominated her name for Arts Club Secretary and she got selected. When several activities and fests were organized, she met Abhishek, who was an office-bearer in Mahaveer, which was another co-ed college.

Gradually, as they met occasionally as fests etc, she started falling in love with Abhi, who had already confessed his feelings towards her. However, she kept all this from Vaibhav and she no longer anticipated letters from Vaibhav.

Her time in college passed this way. Further, she, along with her certain other friends decided to go for MBA, and they started preparing for it. When the results came, her friends could only qualify for CUSAT, she got admission to Bombay University for MBA which was a very good option for her.

She decided to go for it. Fortunately, at that time only, her father got transferred to Bombay. However, Abhi wanted to spend time with her, so he told her that she should also go for MBA in CUSAT. She was not at all happy to hear this from Abhi and she told him that she is not gonna give up on her dream.

When it was about a month she left Cochin, she gets to know that Abhi died because of drowning in the ocean, which was directly after the day she conversed with him. His grandfather even protected her by not disclosing her relation with Abhi and he advised her:

Though, she realized this later, this incident made a very deep impact on her. She then shifted to Bombay with her family and started her journey pursuing MBA degree. She made many new friends. There, she experienced many changes within her. She became hyper-active.

She was very excited to the point that her senses were not in her control. She started running, sprinting, and painting, and even academically, she was on top. During this time she barely slept.

In between, for a very brief period, her mind reminded her of Abhi, but she was not aware of the fact how her life had changed after all this.

Then, a sudden decline in her mood came. From being over-enthusiastic for everything, she became a person with no zeal. It was like an emptiness surrounded her. There was a big void inside her.

Further, to make matters worse, her parents discovered her letters she wrote to Vaibhav and the letters Abhi gave her. They were so angry seeing this that they burnt all the letters in front of her. She was devastated.

How could she explain to her parents what these people meant in her life?

She was now severely depressed. She did not want to attend college. She had severe panic attacks. She even tried to kill herself twice. Once, she felt terrible in her head and wanted to give this pain a physical form.

So, she went to the terrace to jump from the residential building but her father came and he did not say anything to her but started crying(Guys, This was the point where even I started crying. The author portrayed the emotions so well that I could see how a father would feel helpless seeing his child in such a miserable situation)

Then her parents took her to two psychiatrists. They both gave her medications, but it only made matters worse.

She was then taken to NHMI, which was one of the best care for mental health in India. There she met Dr. Madhusudan explained to her that she had bipolar disorder.

He consoled her saying that it was completely normal and she need not feel that burden on her. It was just like any other illness. These words calmed her. She had to stay there for about two months to recuperate.

Initially, she hated being at a mental hospital, but slowly and gradually her condition improved. She made new friends there. Dr. Madhusudan played a very important role in improving her condition. She started feeling happy again. She started enjoying life.

In the end, we can see that she had a happy life where she got many educational degrees and even had a son and lived happily with her family having good control over herself.

What I learned from this book

Faith can do miracles in life

Guys, first have faith in yourself, and God. Even, I have personally experienced it and I would even recommend you to believe yourself. Here’s a quote which I just read today:

Believing in, receiving out

This means, what we strongly believe inside, we will surely receive that outside.

Always cherish the love and care that people give you.

Never take things for granted which you easily get in life. We must learn to value every thing we got in life, and cherish it.

Celebrate being alive. Thank God for everything.

Open up about your feelings and emotions

This is the most important thing that I learned. Do not let your emotions buried deep inside. The more you express, the happier you will be.

And please guys, if you have any problem, please share it with your parents or your friends. You guys are not alone. Don’t be afraid of anything. Open up about your mental health.

This is all I wanna say.

Guys, this book “Life is what you make it” even has a sequel which is “Wake Up - Life is Calling”. I have not yet read it. I will post a review on it as soon as I read it. Hope it also keeps me hooked like this one 🤞

Thank you guys for reading till the end.

This is my first ever post. Please leave your views on this article liked it or even if you did not like it. I will appreciate all your comments. 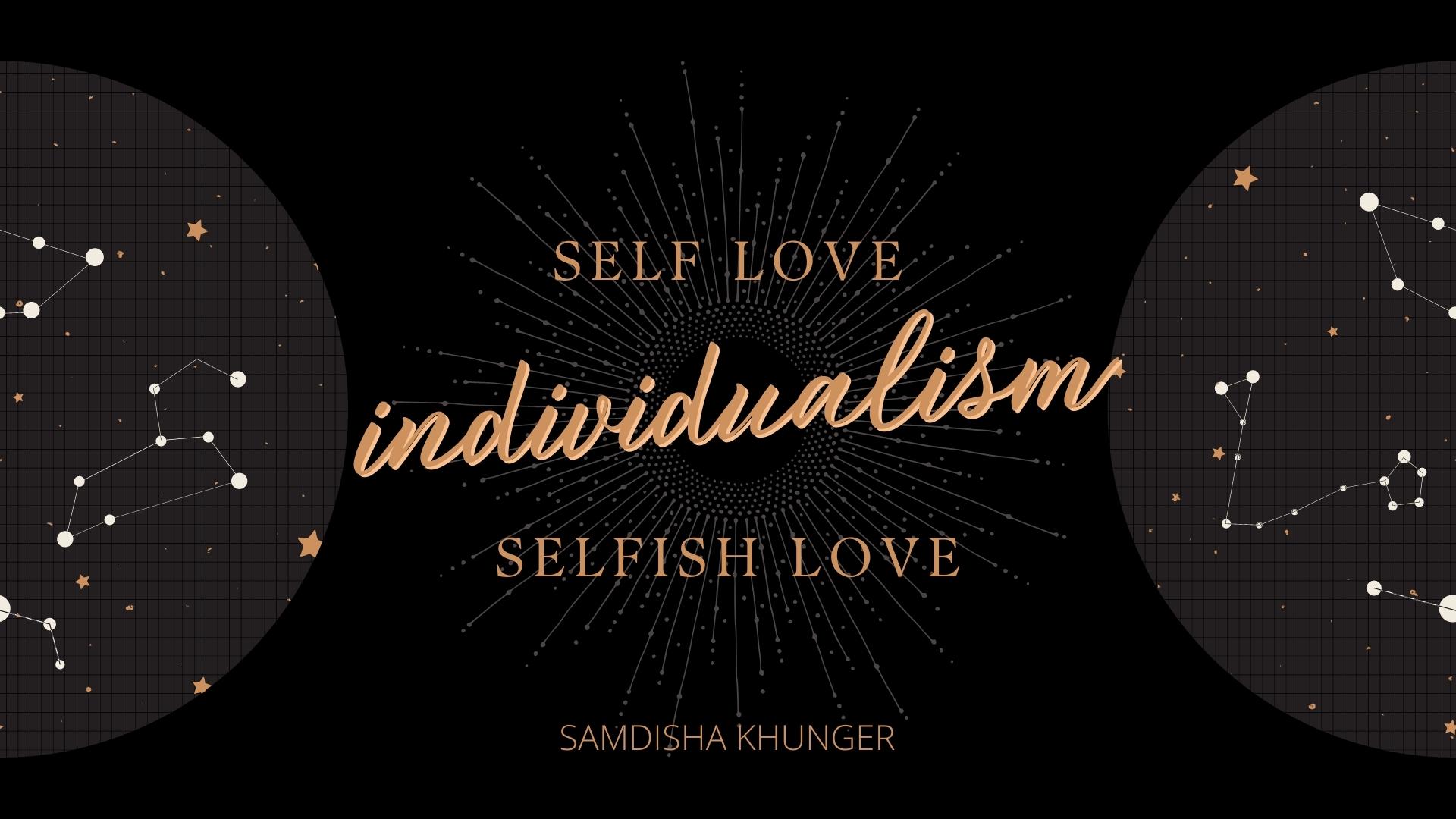 This article explains the meaning of individualism and elucidates whether it is self-love or selfish love. 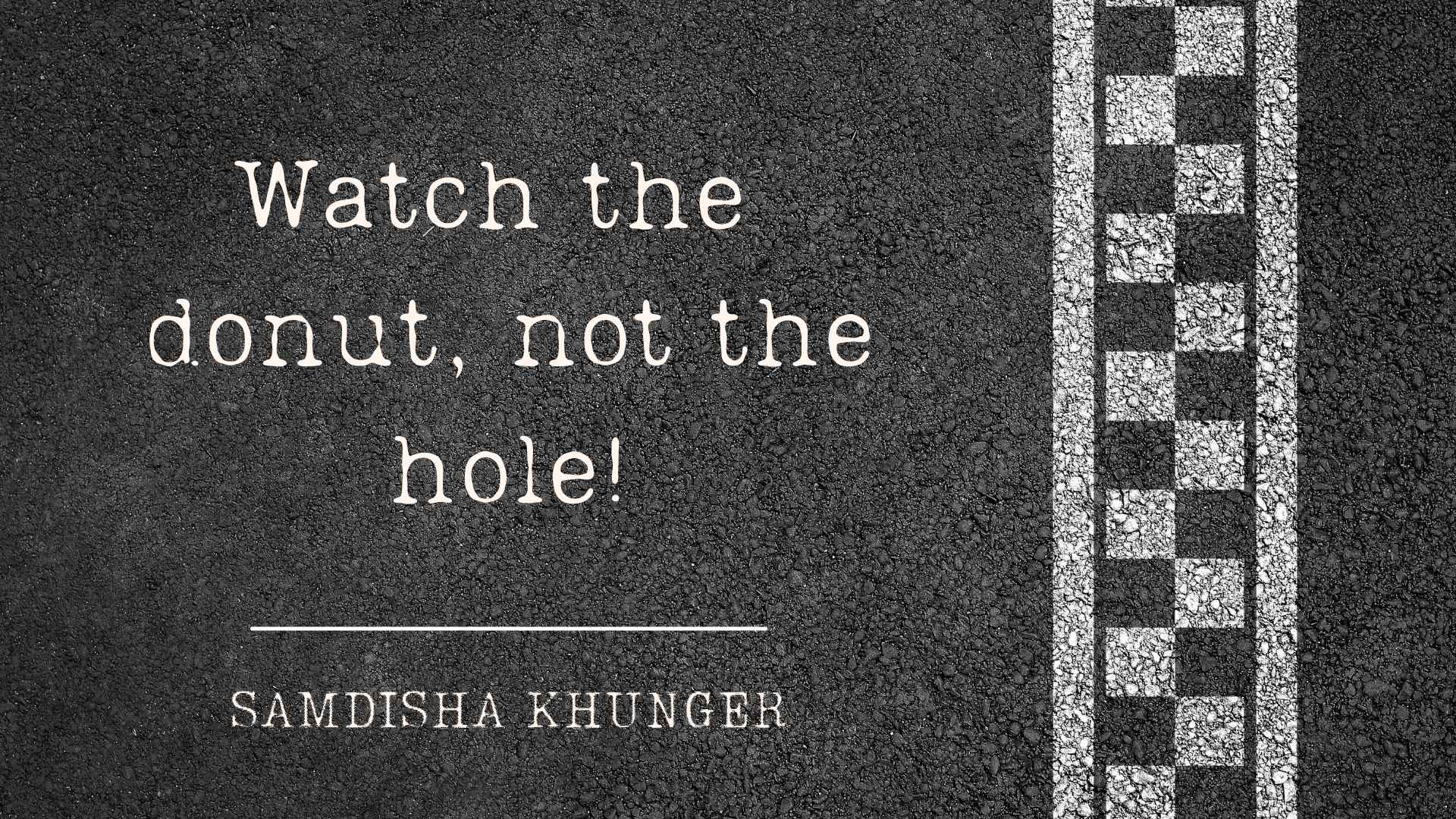 Watch the donut, not the hole!

In this article, I explain how we should perceive life and the various challenges it brings to us. 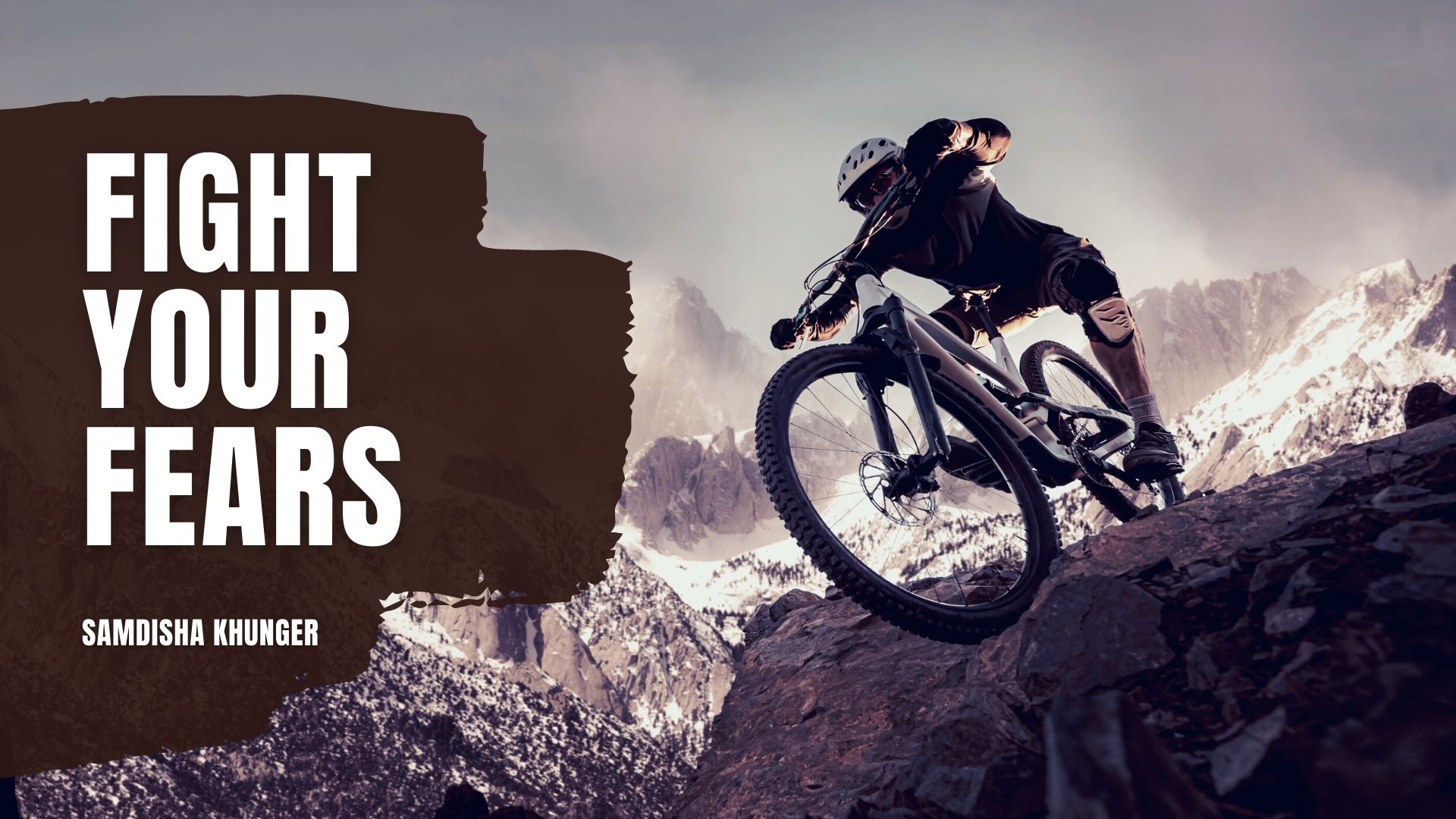 How To Overcome Your Fears?

In this article, Samdisha Khunger explains how we can overcome our fears in any aspect of our life.